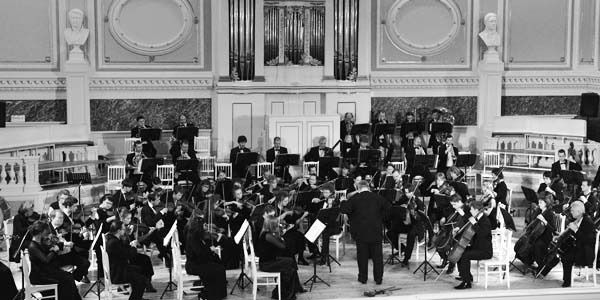 6+
Hermitage Theater / Main hall
Address: Russia, Saint-Petersburg, Dvortsovaya emb., 34
Duration: 01:30
Intermission: -
Schedule
At the Hermitage Theater, the St. Petersburg Symphony Orchestra under the baton of maestro Sergei Stadler will give a traditional New Year's concert. “Paris is a holiday that is always with you,” Hemingway wrote. This year we invite listeners to travel to a city that is often called the capital of Europe. The brilliant festive program will feature the music of French composers, who will perfectly convey the atmosphere of Paris - enchanting, magical, delightful. The works of Offenbach, Massenet, Gounod, Saint-Saens are undoubtedly one of the best illustrations of Parisian life. St. Petersburg Symphony Orchestra artistic director and chief conductor People's Artist of Russia Sergey Stadler Conductor and soloist - SERGEY STADLER On December 13, 2013, the St. Petersburg Symphony Orchestra was created under the direction of the People's Artist of Russia Sergei Stadler. The young collective immediately won the recognition of the St. Petersburg public, who appreciated the diversity of the repertoire and the skill of the musicians. The orchestra performs music from baroque to avant-garde, including works that are rarely heard in Russia. Performs at the best concert venues in Russia, including the Great Hall of the St. Petersburg Philharmonic, the Great Hall of the Moscow Conservatory, the Tchaikovsky Concert Hall, the State Academic Capella of St. Petersburg, the State Hermitage, etc. The cultural life of the Northern capital today cannot be imagined without the annual projects "Music of War and Victory" in the Peter and Paul Fortress and "Autumn Musical Marathon". As part of the Autumn Musical Marathon, the orchestra performed all the symphonies of Tchaikovsky (2014), Brahms (2015), 12 symphonies by Mozart (2016) in one evening as the end of the cycle of concerts “All of Mozart's symphonies”, all of Beethoven's symphonies (2017). "Autumn Music Marathon-2017. Beethoven "entered the" Russian Book of Records "as" The longest philharmonic concert with a program of works by one author performed by one symphony orchestra under the direction of one conductor. " The St. Petersburg Symphony Orchestra regularly holds large-scale educational events. The team collaborates with St. Petersburg State University and other leading universities of St. Petersburg, colleges, music schools. Among the large-scale musical events are the grandiose projects "Tchaikovsky-Gala" and "Prokofiev-Gala" at the Alexandrinsky Theater, "Three Stradivarius Violins", a concert dedicated to the anniversary of Rimsky-Korsakov, "The entire violin Tchaikovsky", "All violin concertos by Mozart", the cycle " All symphonies by Wolfgang Amadeus Mozart ", participation in the festivals" Petersburg Holidays at Dvortsovaya "," Brilliant Strauss "in Pavlovsk, etc. The St. Petersburg Symphony Orchestra performs at the leading concert venues of the city, participates in major international, all-Russian and city-wide events, festivals and forums, such as: St. Petersburg International Cultural Forum; St. Petersburg International Economic Forum, St. Petersburg International Book Salon; celebration of the "Day of Slavic Written Language and Culture", etc. For four years, the collective has played more than 350 concerts in Russia and abroad. The St. Petersburg Symphony Orchestra has demonstrated all the greatness of Russian musical culture La Nouvelle Republique High professionalism and true traditions of the St. Petersburg orchestra school Postimees Young musicians, sincerely passionate about their work, able to turn an ordinary concert into an amazing action Zaman