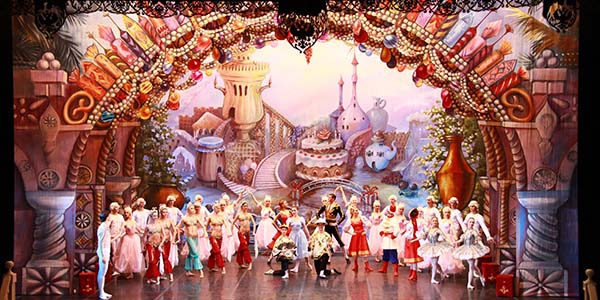 Each guest from 0 years old must buy a ticket.
At all events in the Hermitage Theater there is a free seating.
Tickets WITHOUT SERVICE CHARGE!

On the stage of the theater the troupe "Russian Ballet" by A. Bruskin plays, accompanied by a symphony orchestra. Ballet of P.I. Tchaikovsky, Libretto by M. Petipa based on T.A. Hoffmann's fairy tale The fairy tale and music will take viewers on New Year's Eve - the night of miracles and magical transformations. Exactly at 12 o'clock the wooden Nutcracker doll will fight with the Mouse King, and then turn into a beautiful prince. A poetic and wise tale, loved by both children and adults. A colorful holiday, fantastic tricks, bright dolls, a festive Christmas tree, an air dance of snowflakes and a wonderfully touching story of Masha and the Nutcracker will not leave you indifferent. ACT 1 On a Christmas holiday in the house of the Stalbaums guests gather. Among them - puppet and watchmaking master Drosselmeyer, godfather of the children of Stalbaums, Masha and Fritz. He prepared for them a wonderful gift - the Nutcracker, a toy that can crack nuts. Children are looking forward to the holiday. Finally, the long-awaited moment comes, and before all the New Year tree appears burning with lights. Unexpectedly, among the guests in the costume of a magician appears unknown Drosselmeyer. His ability to revive toys fascinates children, but also frightens them, then Drosselmeyer removes the mask, and the children will recognize in him the beloved godmother. Masha looks at the gift with interest. The doll reminds her of something Drosselmeyer, and she draws the attention of the children to it - everyone is giggling unanimously at him. Drosselmeyer tells the story of The Nutcracker: "In a certain state, there lived the King, the Queen and the little Princess Perlipat, and the evil Mouse King lived in the cave of the royal castle." The little princess was a spoiled girl, and one day she teased Mouse King. The princess could only be splashed by a beautiful prince who would have succeeded in splitting the magic nut of Krakatuk.Once the Prince split a nut and the miracle happened - the princess became beautiful again, but in retaliation Mouse King is transformed it into a Nutcracker. " Enchanted by the Nutcracker, Marie binds her blue ribbon to him, erecting him in field marshals. In the living room appears Franz, Marie's brother. He was also interested in the new doll. But Masha does not give the Nutcracker's brother. The fight is tied up and, in the end, the toy breaks down. Drosselmeier is repairing the Nutcracker. Marie gently caresses her favorite doll. The living room is filled with noisy fun. The last ceremonial dance (grofater) - and everyone diverge. Masha cradles the Nutcracker and does not notice how she falls asleep herself. Night. The room, where the tree stands, is flooded with moonlight. Masha wakes up from a strange noise. Suddenly there is a rustle and scratching of mice. Masha becomes scared. She wants to escape, but suddenly the clock strikes and the room is filled with mice. They are going to ruin the tree. And suddenly ... The Nutcracker comes alive. He fearlessly blocks the way for mice. The room is changing. Mice appear again and again. At the head of the mouse army stands Mouse King. Mice rush into battle. They are opposed by the army of tin soldiers under the leadership of the Nutcracker. The duel of the Mouse King and the Nutcracker begins. Another moment - and Mouse King will win! Masha is in despair! She throws a candle into the Mouse King, he looks around, and the Nutcracker takes advantage of the moment and kills him. Mice disappear. The battlefield is empty, only one Nutcracker is lying motionless on the floor. And then a miracle happens: Masha grows up, and the Nutcracker turns into a beautiful prince. He comes to meet her. The walls disappear, and they are under the dome of the starry sky. Snow falls, and snowflakes are spinning in a magic dance. ACT 2 Magic Palace Confeturnenburg. Masha and the Nutcracker arrive at the palace. Guests are greeted by Fairy Dragee and Prince Orshad, accompanied by numerous retinue. Everyone thanks Masha, whom the Nutcracker owes his salvation. Fairy Dragee announces the beginning of the holiday. Masha and the Nutcracker are admiring the performance in their honor. The holiday is coming to an end. Masha and the Nutcracker leave the fairy-tale country ... Again the living room, where there is a Christmas tree. Masha wakes up. It turns out that it was just a dream. She again is small, and on her knees she has a doll, the Nutcracker.

Each guest from 0 years old must buy a ticket.
At all events in the Hermitage Theater there is a free seating.
Tickets WITHOUT SERVICE CHARGE!