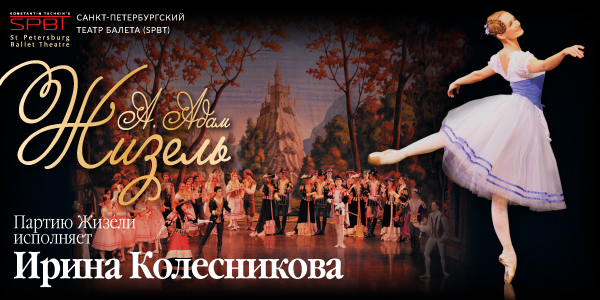 The ballet Giselle is presented by the troupe of the St. Petersburg K. Tachkin Ballet Theater (SPBT).

Soloists and artists of the St. Petersburg K. Tachkin Ballet Theater (SPBT) Irina Kolesnikova in the ballet Giselle St. Petersburg Ballet Theater (SPBT) For the first time in the past six years, prima ballerina Irina Kolesnikova will perform in her hometown on the stage of the Hermitage Theater. The St. Petersburg Ballet Theater (SPBT) regularly presents the seasons of the prima ballerina Irina Kolesnikova on the world's best stages such as the Teatro Champs Elysees in Paris, the London Coliseum, the National Theater in Taipei, the Princess Theater in Melbourne and many others. Irina is the owner of numerous professional awards, to which the Soul of Dance Prize of Ballet Magazine was added in 2018. Kolesnikova rarely performs in Russia, and the ballet Giselle on the stage of the Hermitage Theater will become a real event for fans of classical dance. The performances will be accompanied by a symphony orchestra conducted by Timur Gorkovenko. Domestic and foreign press: The immense grace of the hands, the refined bend of the wrist, the body in the movements of which technique is combined with infinite smoothness: Irina Kolesnikova is a dance diva that few stars can match.

SPBT and the brilliant Irina Kolesnikova left a significant mark on the history of world ballet, turning into one of its glorious and unforgettable pages.

Today Kolesnikova is an established artist with her own "face", with her own sense of images. Perhaps this is the most valuable thing in her. She is unique in terms of technique even when compared to the most virtuoso ballerinas.

…. For the first time, the perfection of the Russian ballet school is presented by a ballerina not from the Bolshoi or Kirov theaters, but by a star from an independent troupe. This is the phenomenon of Irina Kolesnikova ...

Kolesnikova is a ballerina of amazing technical merits. Her dance is written out large, but without exaggeration. Everything she does comes from the depths of her soul.

Summary of the ballet: ACT ONE Count Albert is in love with the peasant girl Giselle. In order not to reveal himself, he disguises himself and pretends to be a peasant. Giselle has another admirer - the forester Hans. He tries to explain to her that Albert is not who he claims to be. But Giselle does not want to listen to him, she loves Albert. Left alone, Hans enters the hunting lodge and steals Albert's sword with the count's coat of arms. The sound of a horn heralds the approach of the hunters. Among them are the Count's bride and her father. The hunters stopped to rest in the village. The Count's bride is fascinated by the naivete and beauty of Giselle and gives her a necklace. When the hunters leave, the peasants begin their holiday - harvest day. In the midst of the fun, Hans appears. In front of everyone, he accuses Albert of lying and shows the count's sword as proof. Giselle doesn't want to believe what happened. Then Hans blows the horn, and his bride appears before the embarrassed count. Unable to withstand the deception, Giselle dies of a ruptured heart. ACT TWO Midnight, Hans came to Giselle's grave. The appearance of the Jeep frightens him. At night, the jeep rise from their graves. Everyone who appears in the cemetery at this time is forced to dance until the person falls dead. Mirta, mistress of the Jeep, summons Giselle's shadow from the grave to take her into the girls' round dance. Count Albert comes to the grave of Giselle. The Count's grief and despair touch Giselle. She forgives him. Hans appears surrounded by a round dance of Willis. The Wilis make him dance again and again and, spinning around, throw him into the lake. The same fate awaits Albert. Mirta orders him to dance. Day is breaking. At dawn, the Wilis lose their strength. Albert is saved. Giselle is saying goodbye to her lover for the last time.

Children from 0 years old - you need to buy a ticket at full price.
All Tickets are NO FEE!