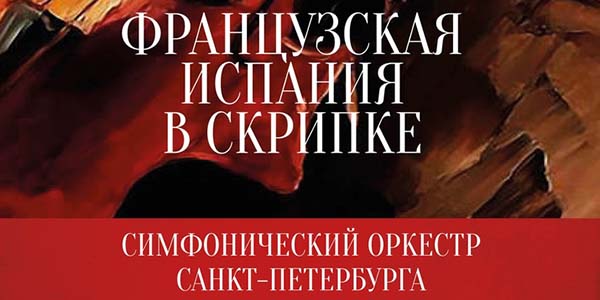 12+
Hermitage Theater / Main hall
Address: Russia, Saint-Petersburg, Dvortsovaya emb., 34
Duration: 02:15
Intermission: 1
Schedule
At the Hermitage Theater Sergei Stadler, accompanied by the St. Petersburg Symphony Orchestra, will present a virtuoso program dedicated to French music. A huge layer of French violin culture is dedicated to Spain. Spanish motifs that have absorbed the features of Moorish, Jewish, Christian art, in general, have always attracted European artists. The unique mixture of colors and emotions attracted attention, gave bright themes and unusual images. French love for Spain is largely due to the personality of the genius violinist Pablo Sarasate, who studied at the Paris Conservatory. The famous Spanish Symphony by Lalo, Introduction and Rondo-Capriccioso by Saint-Saens and many other works are dedicated to him. A new program of maestro Stadler was built around the name of Sarasate. We invite you to share with us the pleasure of sophisticated French music in the amazing atmosphere of the Hermitage Theater! Concert program I department E. Lalo. Spanish Symphony in D minor for violin and orchestra, op. 21 Section II J. Massenet. Dulcinea's song from the opera "Don Quixote" F, Offenbach. Spanish serenade from the opera "The Robbers" M. Ravel. A play in the form of a habanera, op. 51 K. Sens-Sans. Andalusian caprice for violin and orchestra, op. 122 Introduction and Rondo capriccioso for violin and orchestra, op.28 P. Sarasate. Concert fantasy on themes from Bizet's opera "Carmen", op. 25 Duration - 1 hour 30 minutes