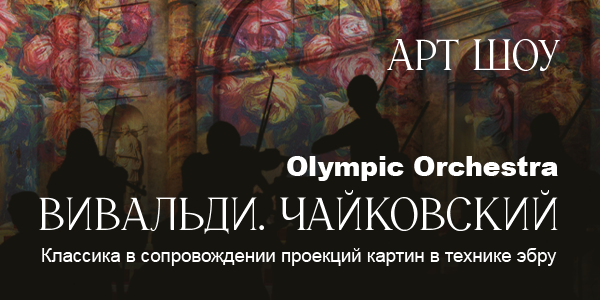 6+
Hermitage Theater / Main hall
Address: Russia, Saint-Petersburg, Dvortsovaya emb., 34
Duration: 01:40
Intermission: -
Schedule
Vivaldi and Tchaikovsky. Art show The Music in the Dark project has long established itself. We went even further and offer to listen to the classics surrounded by paintings! Contrary to expectations, projections can be seen not only on the stage, but also on the walls of the Hermitage Theater. In the original version, each work of the Vivaldi cycle was accompanied by sonnets, the authorship of which is attributed to the composer himself. We turned words into painting, complementing beautiful music with no less beautiful visuals. The baroque has never been as romantic as it will be during this concert! Immerse yourself in the holiday atmosphere on the most feminine spring day. Tchaikovsky wrote his Serenade for String Orchestra in 1880. The composer managed to combine in his work the motives of the tradition of two centuries of Russian and European music, many choreographers used serenades in their productions: D. Balanchin, B. Eifman, M. Fokin. Serenade for string orchestra has won wide recognition of the audience and has become one of the favorite works of the popular symphonic repertoire. The first part - "The Four Seasons" by A. Vivaldi Second part - "Serenade for String Orchestra" by P. I. Tchaikovsky Olga Kaurova, artist, master of technique Ebru. One of the first in Russia to master this direction. In 2012, her first personal exhibition has already taken place in St. Petersburg. She accompanied the performances of such performers as Zara, Metodie Bujor, Anna Malysheva. She is a co-author and soloist of the "Voices of the Subconscious" project with the famous duduk player Argishty, created the unique Crocus City Hall (Moscow). She is a co-author and a regular participant in the show-making of Vivaldi, as well as the author of the Classic and Van Gogh program, which are successfully held within the walls of the famous Annen Kirche. Recently Olga took the position of Chairman of the Artistic Council of the Union of Masters of Ebru Russia. Artists: Olympic Orchestra Artist: Olga Kaurova